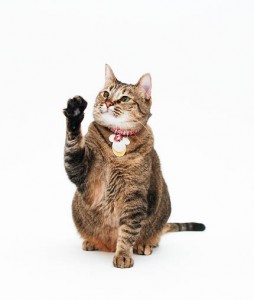 Meet Cliffetta the cat.  Just like all our cats, she was a rescue.  She is the princess of the family.  We unfortunately had two cats pass away within 6 weeks of each other one summer.  This left only one, Spot, in the house.  Over that summer, the girls and I decided to volunteer at the local animal shelter socializing the cats.  Bad decision.  Of course, the more we went the more we got to know the cats.  Over time, many of them were adopted each week.  For some reason this one wasn’t being adopted.  Each time we went to visit, she liked to play but was not the most active.  She loved the carpeted cat house.  We would often find her hanging from one of the ledges.  The girls talked me into thinking about another cat.  Next step was talking dad into it.  That was the hard part.  They drug Craig to the shelter one afternoon to see the cats.  Claire wanted a very tiny kitten that was full of energy.  Her parents did not.  I kept being drawn to the cat that always hung from the cat house.  A little older (10 or 12 weeks I think), fun but not over the top.  She would let you hold her without trying to get away.  A little shy.  Claire decided to pay for the cat with her birthday money if dad would let her get another one.  He actually agreed.  I talked her out of the tiny playful cat.  I told her the one we called “Cliff” (because it was like a cliffhanger off a ledge) wasn’t mean, would let you hold it, and seemed a little more reserved.  My mommy magic worked and she agreed that was the cat for us.  We filled out the application for adoption.  It wasn’t until then we realized HE was a SHE (we called him Cliff thinking it was a boy).  Even better as I prefer female cats (even though we did have a male cat already at home).  Since Cliff was not quite a princess name, we changed it up a bit and Cliff became Cliffetta.  I bet she is the only one in the world with that name.  So the cliffhanging cat, that for some reason was not being adopted, was now a member of our family.  Over the years she has come out of her shell, grown a love for strings, sticks and her brother Spot.  She is still shy, does not like to be held or petted (but we force it and you will get a purr out of her even though she acts like she hates it), has even started sleeping in the bed with Carly and Claire (refuses to jump into our master bed).  She has almost become the perfect cat.  Who would of thought the unadopted cat, now has her own thrown by the window and gets her way through using her big beautiful eyes. 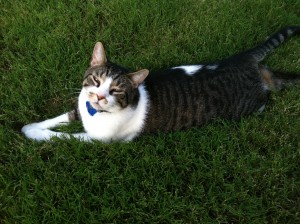 Meet Spot.  Spot the cat.  Oh the journey we have been on with this cat.  There once was a time we would of paid to give him away if it weren’t for a little girl who wouldn’t let us.  He became a part of the family from a garage sale.  That should of been our first sign.  It was a few months after my grandfather had passed away. We had family in town visiting, checking on my grandmother and finishing up closure of my grandfathers passing.  Just like every Saturday morning, my grandmother and my aunt went garagesaling.  What we didn’t expect was for them to return home with a cat.  My grandmother was an avid animal lover and would of taken in hundreds if she could.  Now that my grandfather had passed, she no longer had to ask permission before getting another pet.  This garage sale cat was his temporary replacement.  But that was not our cat.  And we had no idea we would be getting one also.  Once my oldest daughter Carly (6 at the time) saw grandma’s new kitten, she begged to have her own.  Did I mention we already had two cats at home?  I don’t know how she did it, but she convinced her dad and I to go back to the garage sale to see if there were any more kittens left.  This was a litter found in a park.  They were tiny.  No mom to be found.  And FREE.  Another red flag.  With her big blue eyes and begging, we picked a kitten and home it came.  It had this white spot on its back so when we asked what to name it, Carly called it Spot.  Spot was cute at first but noisy in his carrier at night.  As he grew, we quickly noticed he was a true feral cat.  He was determined to go outside.  We tried keeping him as an inside cat, as both our other cats were, but he said no.  For our sanity out he went.  He would attack our feet in bed.  Attack Claire (almost 2 at the time) for no reason.  He was vicious.  I think we all have scars to prove it.  Someone how, over the years, he was still loved by Carly.  As much as we wanted to, we could not get rid of her cat.

This cat is now 9 years old (2014).  This is the cat that now sleeps by me in bed every night.  This is the cat my husband gets up every night around 4am to let outside.  This is the cat we have spent more money on medical bills and should of died multiple times (and in the early years it was tempting to let him).  Spot the cat now follows us wherever we go outside, comes to us to get his cheeks rubbed, snuggles in my armpit with kitty biscuits, has allowed us to meet our neighbors due to his socialness, lets Carly hold him and annoy  him with only a meow of a warning (well, occasionally a scratch or bite but she always deserves it) and has learned what love is about.  It has been a rough 9 years but I couldn’t imagine our life without him now.  And the man who hated the cat for years (Craig) will now admit Spot is his buddy and best friend.